January 10, 2017, I began watching President Barack Hussein Obama give his last speech as the leader of the free world. I say “began” because I didn’t get a chance to see it in it’s entirety. I was too eager to get to a movie theater to catch “Hidden Figures”. Generally a night a black excellence that was at the very least bittersweet. The characters were mind blowingly brilliant African-American women at NASA; Katherine Johnson (Taraji P. Henson), Dorothy Vaughan (Octavia Spencer) and Mary Jackson (Janelle Monáe). I have to admit, after watching this film I felt myself being pulled 2 ways emotionally. On one hand, I felt this overwhelming sense of pride in feminine blackness. Simply to see women of color so positively portrayed was inspiring to say the least. It restored my faith in educational diversity of career paths. I was proud just to share the generational resilience that is bestowed upon black women that I too carry. 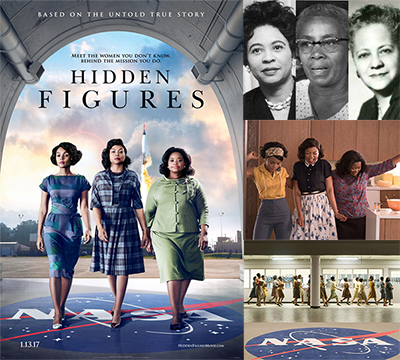 However, on the other hand, I also felt mad as hell! I was genuinely upset that I had been hoodwinked, bamboozled, led astray, run amuck! It is absolutely astonishing that these beautiful, intelligent and significant black women did not make one appearance in any history book I’ve read. The movie title in itself is indicative of how these historical figures were indeed hidden. With the direction of our country taking turns down avenues of hate, injustice and an orange President – elect who trolls on twitter, we needed to see our strength still.

In addition to all of this beautiful blackness, Pharrell Williams, the songwriter and producer of the film also shined bright with an amazing soundtrack. At the recent Golden Globes Award, Michael Keaton as well as a correspondent “mistakenly” referred to the film as ‘Hidden Fences’. And you guessed it, black twitter took off. 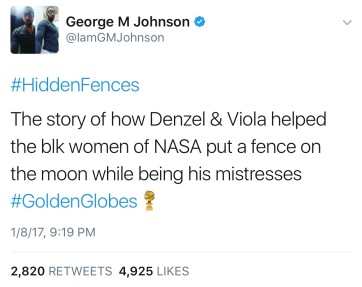 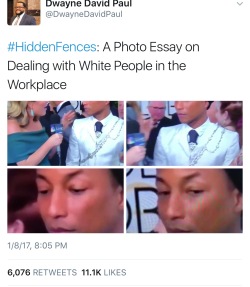 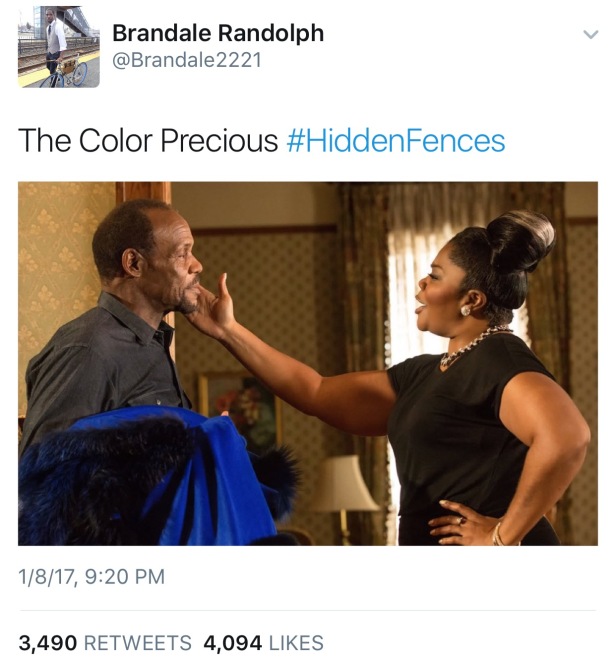 Despite the name slip ups, it still brought attention to such a major film. I strongly encourage everyone, all ethnicities and backgrounds to check out “Hidden Figures”. Thank you Theodore Melfi for acknowledging the importance of these 3 black women who changed history. Maybe it’ll provoke you to make your own.